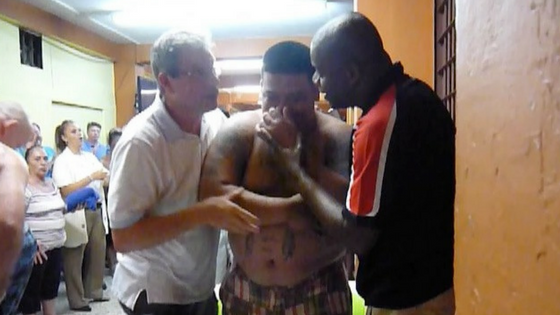 Recently, my wife Carla and I were privileged to go with seven other people to Costa Rica to support the prison ministry of Carlos and Karla Cunningham. Asbury has partnered with Carlos for many years. We have been witnesses to the incredible work of the Holy Spirit through the faithfulness of the Cunninghams.

For example, San Sebastian Prison, located in the capital city San Jose, was at one time the most notorious prison in Costa Rica. God has transformed the lives of so many men in this prison that the Christian population is around 35%. There are seven churches which meet every night in different cell blocks in the prison. Carlos has been able to raise up pastors and small group leaders so that the men are discipled in the faith.

On Monday, September 26, we went into San Sebastian Prison for a time of worship and baptisms. The praying was passionate; the singing was robust; the baptisms were Spirit-filled. When all was said and done, Carlos and I had baptized 62 men in a little inflatable pool which was two-thirds filled.

These men will be mentored in the Christian faith, join a small group and become part of one the seven churches in the prison. Even though incarcerated, these men have found a new freedom in Christ.

I am non-conversational in Spanish. But each year I go, I do memorize a phrase that I share with the men in prison. This year it was Psalm 126:3. In Spanish it is Sí, el Señor ha hecho grandes cosas por nosotros, y eso nos llena de alegría.

In English: Yes, the Lord has done great things for us, and we are filled with joy.

Two weeks ago, much joy was experienced in San Sebastian prison!

Posted in On Mission, Thoughts From Alan | Permalink