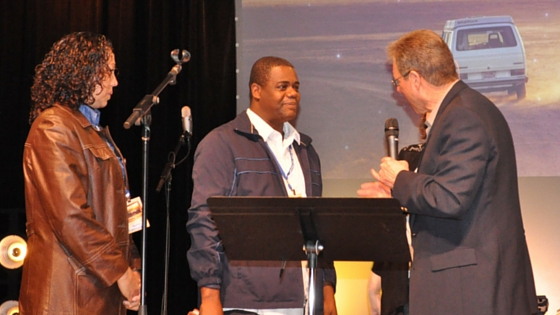 Vámos a la casa del Señor! Let us go to the House of the Lord!

We have had a wonderful week hosting 70 of our mission partners during our Global Impact Celebration. It is our custom to honor one of the missionaries during the opening ceremony on Wednesday evening. This year we honored Carlos and Karla Cunningham. We have had a partnership with the Cunninghams for nearly 15 years. During this time we have had more than a hundred people from Asbury journey to Costa Rica to support Carlos in prison ministry.

Former pastor John Ryberg made the initial contact with Carlos during an exploratory mission trip. From this first meeting, our partnership has flourished and is making an incredible impact throughout the prison system of Costa Rica. Here is a little background information on Carlos as provided by John:

Carlos Cunningham began to visit prisons in Costa Rica as a young man. He began by handing out tracts and sharing the Gospel. The men would profess faith, but Carlos soon realized that they were not receiving meaningful training throughout the week to help them to live according to their decision.

During this time as Carlos was volunteering in prison ministry, his cousin was convicted of stealing a bicycle and was sent to prison. This cousin was placed in a very bad prison with men who had committed violent crimes. Carlos’ cousin was murdered by one of the prisoners, which caused deep grief to his family and caused Carlos to seriously question God’s plan for his ministry and life. After much thought and prayer, Carlos felt God was calling him to full time prison ministry.

In those early years, Carlos struggled financially, living a cycle of working an outside job for a few months to earn enough to minister in the prison until the money would run out and then returning to work again. He had been at this for about 12 years, as the first ever Protestant chaplain in the prison system, developing a team of volunteers and establishing an association (the Costa Rican equivalent of a non profit corporation/ministry) Voz de Libertad, when Asbury came alongside to partner with him and his wife, Karla.

Carlos has established 11 churches. Ten of these 11 churches are in various prisons in Costa Rica. San Sebastian prison in the capital city of San Jose has seven churches. This particular prison has been profoundly impacted for good because of the growing numbers of incarcerated Christ-followers. Voz de Libertad has been asked by Costa Rican government officials to assist them with spreading their brand of rehabilitation throughout the entire prison system of the country.

Thank you so much, Carlos and Karla, for being faithful disciples of our Lord Jesus Christ and building the Kingdom of God in what may seem to be an unlikely place. But for those of us who have been with Carlos in Costa Rica, the houses of the Lord are found in the prisons!