My Trip to Belize 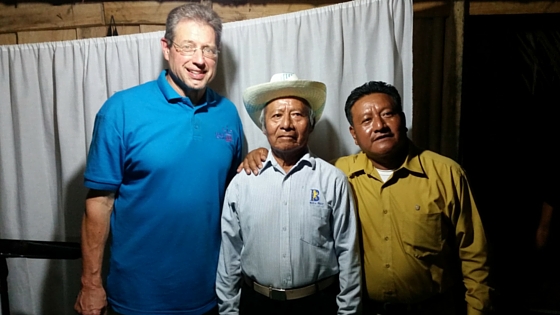 This is a picture of me, Florencia Mess (the Mayan chief) and his son Hilario (his son and the pastor of the house church).

On September 19 I left with a team of 8 (Scott and Melodee Ray, Chris and Kim Lund, Keith and Rebecca Freitag and Joe Vonderheide) to Belize.  We went to support the work of our mission partners, Drs. Edwin and Terza Leon.  We also had the privilege of working with Hilario Mess, founding pastor of a house church in the Maya village of San Pedro Columbia and Alvaro Padilla, Director of Missions and Church Planting for the Full Gospel Church of God in Belize.

We did construction and repair work on two parsonages and one church. We had three evening bible programs for children. We had a total of more than two hundred children attend.  We also participated in several worship services.  I had the privilege of delivering three messages in three different churches.

Last Friday we drove over 3 ½ hours to the Mayan region of Belize, which is located in the southern part of the country.  Hilario is Mayan and became a Christ follower several years ago.  Hilario’s dad, Florencio Mess, is a Mayan chief.  He is also recognized as one of the 3 musical kings in Belize. On the way to the village we stopped to pick up Florencio and his wife (Hilario’s stepmother).  Florencio had only been to a church one other time.  His, son, Hilario explained to his father what we would be doing (worshipping) and to whom we would offer this worship (Jesus).  His father said that he would be glad to be present for a new experience and would be open to new things.

That evening, about 40 of us gathered in the house church. We sang, prayed, received an offering and then had testimony time.  I then spoke on the paralytic being lowered through the roof in Capernaum.  I spoke of the uniqueness of Jesus and the question he asks everyone, Who do you say that I am?

Hilario gave an invitation for people to receive the gift of forgiveness and salvation in Jesus Christ.  Nine people came forward, including Hilario’s father, Florencio, the Mayan Chief and his wife! There was much rejoicing! I will never forget seeing Hilario on his knees, weeping for joy over the salvation that had come to his family.

Earlier in the week, I had a fall in the night. I hit my head on a bedside table, with enough force to break the table! Little did I know that the fall probably precipitated a retinal tear.  The day after we returned home I noticed that I had lost some of the vision in my right eye.  I immediately sought medical attention and had emergency surgery on Monday morning.  I had a 30% tear of my retina with detachment. I am mending now and hope to have a full recovery.

Although retinal detachment is a very serious medical condition, for me now, it is an annoyance.  I am so grateful that my medical issue came to light on Sunday afternoon and not on Friday evening.  For on Friday evening, something eternal happened.

Posted in On Mission | Permalink