Home Asbury Church Messages Archives Subscribe
Pray for Turkey
What I've Learned from the Pope's Visit to the U.S. 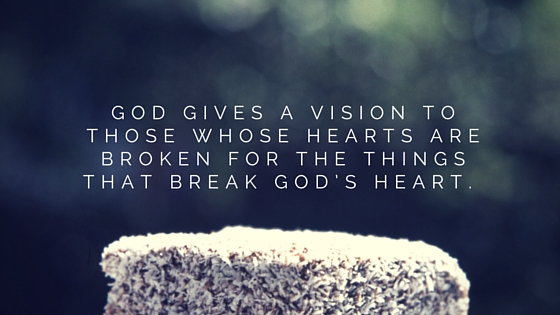 The book of Nehemiah is a story of one man who led the effort to rebuild the walls of Jerusalem, after the city was destroyed in 587 B.C. and many of her citizens were taken into exile. Nehemiah’s leadership is a sterling example of what can be accomplished when God’s gives a vision His people.

But before Nehemiah was in a position to lead, he had a cushy job in the Persian city of Susa. He was the bartender for King Artaxerxes. One day there were some Jewish brothers who came from Judah. Nehemiah asked them about the people in Jerusalem. There response was bleak: They are in great trouble and disgrace. The wall of Jerusalem is broken down and the gates have been burned with fire.

When Nehemiah heard these things he sat down and wept. His heart was broken. Shortly thereafter as Nehemiah was serving the king wine, the king asked him, “Why does your face look so sad?” With a bit of fear Nehemiah responded, “Why should my face not look sad when the city where my ancestors are buried lies in ruins? Nehemiah’s heart was broken.

It just so happened that his heart was broken for the things that break God’s heart. When the king asked him, “What do you want?”  Nehemiah said a quick prayer and then replied, “I want to go back to the city and rebuild it.”

The rest of the story is recorded in the book that bears his name.

God gives a vision to those whose hearts are broken for the things that break God’s heart. This is the reason for the greatness of God’s church called Asbury. God broke the hearts of some of our people for the plight of the homeless and abandoned in our city…and a ministry was born; a thrift store was created; a ministry to the Downtown Rescue Mission and homeless began. God broke the hearts of our people for a people group, the Quechua of Peru, who did not have a bible in their own language…and now, 25 mission trips later the Quechua are embracing the Lord Jesus who loves them with an everlasting love. God broke the hearts of our men and women for those in prison, at Limestone Prison, in Costa Rica and elsewhere…as a result hundreds of men and women behind bars have found freedom in Christ. God has broken the hearts of our people for the students in our city who suffer neglect at home and deprivation from the taken for granted necessities in our lives.  And now, scores of our people reach out to these young people, creating a safe place for them to feel the love and acceptance of God.

Our hearts are broken for a Christian missionary in Istanbul. When he converted from Islam, he wanted to take Christianity to his people. He has lost his family. We must help him. God placed our people at an orphanage in China; their hearts were broken as they heard stories of babies being abandoned on the streets. Something had to be done. Then a fire started burning in their bones and they did something. Children are being rescued, saved and adopted. This happens when our tears become the tears of God.

When God has broken our hearts, there will be a burning in our bones….we will have to do something…God’s kingdom will become a reality. We will never be the same.

The Lord’s Prayer says, Thy kingdom come, thy will be done…on earth as it is in heaven.  Amen!!

Posted in On Mission, Vision | Permalink